Roleplay Area: FFA
Name: Zen Steel-Hoof
Sex: Male
Age: Stallion
Species: Earth Pony
Eye Color: Brown
Skin Color(s): Tan
Mane/Tail Color(s) & Style: Brown
Physique: Peak Earth Pony
Cutie Mark: A Yin-Yang representing his talent as a martial artist.
Residence: A martial arts dojo in the mountains of Neighpon far away from civilization.
Occupation: Professional Martial Artist
Personality: Goodnatured, Honest, Hardworking, Kind-Hearted
History: Zen was found outside in a basket as a foal by a martial arts sensei after his parents were killed by an unknown assailant. He never had a formal education but his sensei raised him like a father and taught him martial arts. He grew up leading a relatively happy life until his master died of old age. Zen was devastated but kept persevering. 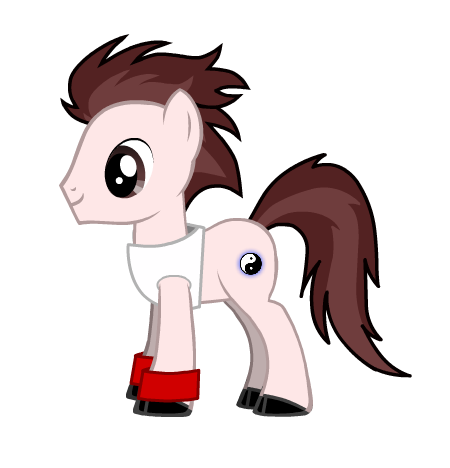 Expert Martial Artist: Zen had a high aptitude for martial arts ever since he was a colt. He quickly became a black belt and earned his cutie mark at a very young age. He is still trying to perfect Hoof-jitsu.

Highly Honed Instincts: Zen is able to fight without using his sight when he has to by utilizing his other senses.

Ignorance: Zen's knowledge is very limited due to not having an education growing up. His sensei never thought to teach him anything but martial arts.

Back to Accepted Characters