Roleplay Area: FFA
Name: Swift Scimitar
Sex: Male
Age: 17 years old
Species: Earth Pony
Eye Color: Black
Skin Color(s): Off-white
Mane/Tail Color(s) & Style: Black with gray
Physique: Athletic and acrobatic
Cutie Mark: A scimitar representing his talent with foreign swordplay
Residence: Saddle Arabia
Occupation: None
Personality: Despite his upbringing, Swift is a generally optimistic, fun-loving, goodnatured, and kindhearted stallion. Though he has been forced to steal for survival since he was a colt, he showed joy in escaping the brutish guards who pursued him. And seems to actually find enjoyment in the struggles of his day-to-day life. He does low key want to have a normal and better life however. Nevertheless, though he doesn't mind stealing from the marketplace denizens, albeit forcibly so, Swift is in no way a selfish pony. Not only were the thefts for survival, Swift was also never above sacrificing his food for the less fortunate of Saddle Arabia, such as starving fillies and colts. Showing how selfless he truly is. He also likes to commonly rob lairs of other thieves, and donate the stolen jewels and riches to less fortunate citizens.
History: Swift grew up in poverty on the streets of Saddle Arabia. He never had any ambition growing up not wanting to hold a job or even go to school and it took him forever just to get his cutiemark. His mother died of an illness and his father died from sheer disappointment about what a loser his son was. Afterwards he was forced to fend for himself on the streets and steal to survive. 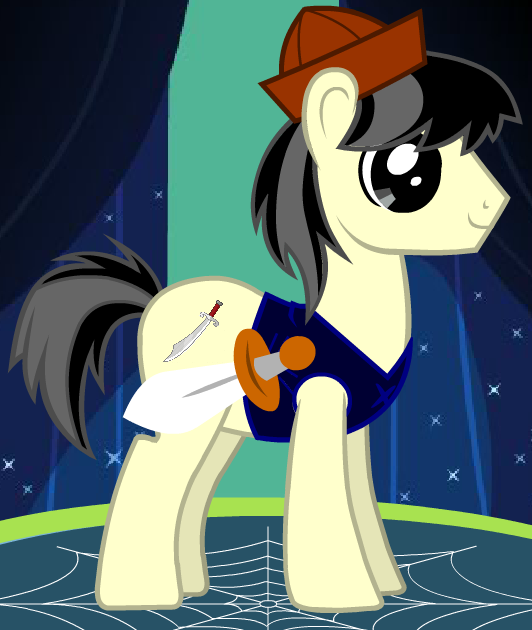 Expert Thief: Swift became a highly skilled thief, gaining a lot of experience since he was a colt. He is able to snatch any object right out from under a pony's nose without them seeing it.

Excellent Speed: Swift is very fast, having spent years outrunning the Royal Guards of Saddle Arabia during his theft of food and money.

Excellent Reflexes: Swift possesses good reflexes, able to dodge the strikes of snakes and even large beasts such as Chimeras and Manticores.

Excellent Strength: Though not his most noteworthy trait, Swift does have a certain degree of strength. With a two-hooved hit, he was able to knock out a Royal Guard who was at least twice his size.

Near Genius Level Intelligence: While harboring a modest amount of physical prowess and fighting ability, Swift's true asset is his intelligence and wit. Swift is very smart and utilizes these aspects to best his enemies, and such practices have proven effective for him in various situations. He is a quick-thinker, with the ability to formulate a scheme (usually varying in scale, making him rather versatile) that ends in his favor. He also takes advantage of his societal stereotype to further his schemes, as most wouldn't expect a meager street urchin to have the intellect to outwit others. Swift has demonstrated amazing cleverness, as he has feats of being able to outsmart enemies multiple times. He is capable of evading capture from royal guards despite being greatly outnumbered and overpowered.

Skilled Swordsman: Swift has demonstrated some swordsmanship abilities from practicing swordplay after swiping a Saddle Arabia royal guard's scimitar. His primary weapon is the scimitar which was the main weapon of the Saddle Arabian royal guards.

Master Locksmith: Swift can pick even the toughest locks with ease. He can even use objects like short wires and hairpins etc. as lockpicks.

Expert Escape Artist: Swift is able to escape from the toughest of confinements. Even from shackles and chains. Any time the guards were lucky enough to capture him he escaped the dungeon easily.

Animal Communication: Swift is an animal whisperer, able to understand and communicate with animals just like Fluttershy. Though when heard by a normal pony, he simply sounds like he's speaking gibberish.

A Scimitar: Swift's primary weapon is a scimitar that he stole from a Saddle Arabian Royal Guard.