Roleplay Area: FFA
Name: Master Bushido
Sex: Male
Age: Middle-Aged
Species: Earth Pony
Eye Color: Green
Skin Color(s): Caucasian
Mane/Tail Color(s) & Style: Long and black
Physique: Peak Earth Pony.
Cutie Mark: A masumune blade representing his talent as a Sword Master
Residence: Neighpon
Occupation: Pottery Painter. Formerly a Sword Master.
Personality: Wise, Stern, Strict, Disciplined, Somewhat judgmental.
History: Bushido is a stallion of many mysteries and is a very strict, and judgmental teacher. often referring to Crimson as "my stupid/idiot apprentice," and bringing up embarrassing incidents in Crimson's past to provoke him into training harder. But despite this rough exterior, he has a deep sense of responsibility to Crimson and those he protects in the rare cases when he does get involved. He loves sake, himself, and teasing Crimson, and while he is frequently seen drinking copious amounts of sake alone, he never becomes drunk. He and Crimson frequently have bouts of slapstick conflict between them, and although he treats his apprentice rather roughly during training, he does so mainly to only to get his attention; he remarks to him as his idiot apprentice as he desires Crimson to be more knowledgeable and insightful, while also to see him have more confidence in himself. Also knowing the ultimate destiny as a master of the Flying Heaven Govern Sword style, he also wants to ensure Crimson would not bear regrets when that day would come, and for him to know that, despite his rough teachings, that he never wanted his apprentice to be miserable using the style. He dislikes the complications of socialization, and hearing of the ills of society, both of which he finds annoying, and ultimately incessant and depressing. In order to avoid having to work with other ponies, he makes his living as a pottery artist alone living as a hermit on a mountain (a profession that he is reported to excel at). He also comes off as somewhat lazy and laid-back but in truth he is the most powerful Samurai in all of Equestria, vastly superior to Nimble Blade, and even Crimson Katana in Skill. Nothing is known about his past prior to meeting Crimson. 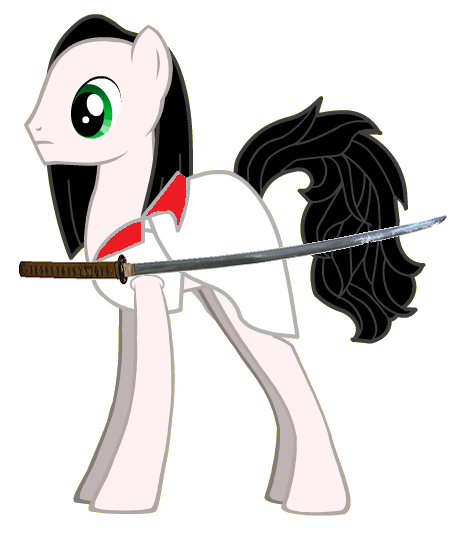 Master Swordsman: Bushido is the master of the Flying Heaven Govern Sword Style. Having taught Crimson Katana everything he knows. He is the most powerful Samurai in all of Equestria with no rival or equal. His ma'ai is at such a level of skill that if one were to enter this zone, it would only mean instantaneous defeat.

Super Speed: Bushido can run and fight faster than even a Wonderbolt.

Great Strength: Bushido's strength is so great that no other Earth Pony and not even a Minotaur or a Yak can match him.