Roleplay Area: FFA
Name: Nimble Blade
Sex: Male
Age: Stallion
Species: Earth Pony
Eye Color: Yellow
Skin Color(s): Peach
Mane/Tail Color(s) & Style: Black and Slick
Physique: Peak Earth Pony
Cutie Mark: A fancy katana representing his swordsmanship talent.
Residence: Neighpon
Occupation: Leader of The Black Coffin Assassin Guild
Personality: Nimble Blade is a coldhearted and battlehardened samurai warrior. He never shows much regard for life, at some points even letting on that he likes to kill. He is rather morbid and arrogant. Nevertheless, none of these character flaws prevent him from being a superb investigator and fighter. He expects those involved in the military, whether they're Black Coffin Assassins or royal guards etc, to carry out their duties without letting their personal feelings interfere. He believes in peace and order, even in the society created by his former enemies.  To uphold this new peace, Nimble carries out his duties in the shadows of society in his own way; following his lifelong code of purpose with devotion, doing all the necessary dirty work, killing off the despicable and those beyond saving. Anyone he considers to be corrupt or despotic, he targets for elimination, in the honor of his country and his fallen comrades.
History: Nimble Blade is the leader of The Black Coffin. A deadly Assassin's Guild. He often goes by his nickname "The Lone Wolf". Having a long-standing rivalry with Crimson Katana since their days on opposite sides of the great war. Nimble nevertheless holds a begrudging respect for the samurai and has come to his aid on assignment more than once, acting as a ruthless ally and the voice of cynical reason. 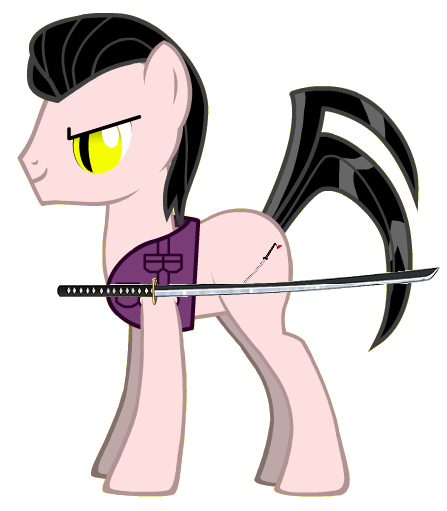 Elite Swordsman: Nimble Blade is one of the finest samurai in all of Equestria. Even Crimson Katana struggles against him.

Skilled Hoof-to-Hoof Combatant: Even when disarmed, Nimble is a fierce martial arts fighter.

A Katana: Nimble wields a neighponese katana made of fully tempered neighponese steel making it nearly impossible to break.