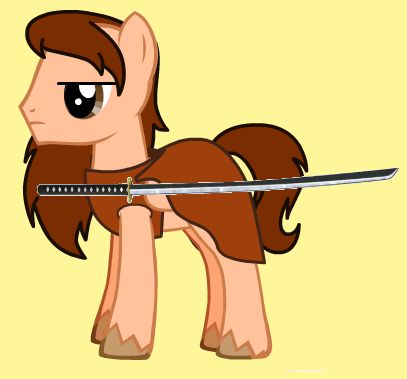 Master Swordsman: Auburn is a peerless and lethal killing machine. Even entire armies fall before him like fields of grass before a lawnmower with him emerging completely unscathed.

Super Speed: Even despite having broken wings, Auburn is just as fast as he is deadly. Not even the finest Wonderbolt Athletes can match him in speed.

Killing Edge and Wo Dao: Auburn carries an eastern Killing Edge Katana Sword and a Wo Dao Katana Sword which he can Single Wield or Dual Wield. They are made of tempered Neighpon steel and making them nearly impossible to damage or break.

Flightless: Despite being a Pegasus, Auburn cannot fly due to having broken wings.

Also tagged with one or more of these keywords: Pegasus