Should the FiM comics be canon?


33 replies to this topic

Hi there! It has come to the attention of the staff that there is a question that we are not sure how to answer. Should the FiM comics be considered canon for the Land of Equestria Roleplay area? This would mean that any Lore revealed in the comic books would become board canon. We're pretty keen to involve users in the inner workings of the board, so instead of just discussing it among the staff and making a decision, we're pitching it to you, the userbase!

Now, how would this work for those who do not want to buy the comics or who do not have access to them? Well, the staff would write a summary of the events of each comic, and they would be filed away in the Approved Lore area. That way, everyone would be in the loop no matter what.

For those who have read the comics, you'll know that there are a lot of neat tidbits revealed. I won't go into them at the moment, for those that don't want to be spoiled. But, the comics do fill in little bits of backstory for some of the characters, or little known facts about them and such.

Nobody is required to vote, but if you've read the comics or if you're just open to more canon lore, feel free to cast as yay or neigh. This poll will likely close in about two weeks, so spread the word and don't dilly-dally!

There's a nifty poll, but I'll say here that this isn't something that will be settled on votes.  Arguments matter too, so please outline your reasoning.  WHY should comics be canon/not canon?

I would say that the comics are not as widespread and well-read as the show is.  Lots of folks don't read or haven't read the comics, and to make them canon brings in the sticky issue of referencing.  The show is our baseline.  We've all seen it.  The lore we create can be seen right there in our forums.  The comics are a sort of limbo, and that's problematic.

I don't think this is a black and white kind of decision that can be made. It's a case by case kind of thing.

I would just run it through the Lore department if I wanted something from the comics to be canon.

I personally think comics could provide a huge opportunity for new lore.

The comic creators have stated that they want to keep canon with the show. So, the comics should never go against what the show has told us, since the creators are actively trying to make them work in tandem. In addition, the comics can go a little beyond what the show does, in terms of content. They delve into things the show can't, and even fill in some gaps in the series (such as Princess Luna's look changing from season 1 to season 2). As mentioned above, there would be a detailed summary of the comics written up for those who don't want to buy it or maybe can't buy it because it's not available in their area. So, we won't leave people hanging if they aren't into the comics.

Simply because the comics are pretty good and I really don't see a reason for it not to be canon.

In fact... my "headcanon" is that the comics are canon...

I voted yes because I feel the comics can fill in a lot of the lore making our lives easier where the show either A) Can't delve into because it's a kids show B) Don't have the time to delve into or C) don't care to delve into because they have bigger better things to do. This, plus the fact that hasbro does have their hands in the comics, makes me believe they should be held as canon as the show, they only exist because Hasbro says they can.

Also the comics make so many fan desired things canon that the show can't ( because the writers are barred from looking at fan content) that they would make a lot of fan made concepts canon as they really need to be, saving everyone the time of proposing, filling in blanks the comics have already thought out, and going through the whole lore approval process to do.

And lastly, they fill in a LOT of questions the show leaves us with, such as Nightmare Moon and Luna's transformation, what happened to the Changlings after the wedding, How Cadance and SA met, and even make a D&D style game canon! But also give us a lot of depth to other characters we don't normally see and add character to those we know and love with the mini-series.

It would add a lot to our lore and fill in a lot of gaps that cause trouble between RP'ers (Where one may not know how to RP with another because of such gaps) but also add a lot to the wonderful world of Equestria in small parts of life that would be incredible to add to the RP world.

Let's recap what will be canon, shall we?

- The fate of Chrysalis

- The story of Luna and Rarity

- How Shining and Cadence got together

I to say yes for many the reasons named above. The fact the writers are actively working to make sure the comics stay in line with the show. The fact that the show writers are shown for approval the content of the comics. Lastly on the arc involving Nightmare Moon. the fact that Lauren Faust herself said that a dark force had transformed Luna... though I'll need to find the deviantart post to confirm.

I to say yes for many the reasons named above. The fact the writers are actively working to make sure the comics stay in line with the show. The fact that the show writers are shown for approval the content of the comics. Lastly on the arc involving Nightmare Moon. the fact that Lauren Faust yourself said that a dark force had transformed Luna... though I'll need to find the deviantart post to confirm.

Problem is, they arent canon, sadly. Apparently "Daring Dont" broke the illusion because (the way I understand it) in the comics universe, Twilight's mom writes the books, while in the series universe, well, Daring Do writes her own books

Really the comics can still be treated as canon, all it requires is a different interpretation of that scene.

Problem is, they arent canon, sadly. Apparently "Daring Dont" broke the illusion because (the way I understand it) in the comics universe, Twilight's mom writes the books, while in the series universe, well, Daring Do writes her own books

What I believe is that Daring Do goes on the adventures, then returns and tells them to Twilight's mother, who actually writes down the stories.

What I believe is that Daring Do goes on the adventures, then returns and tells them to Twilight's mother, who actually writes down the stories.

While I'm personally still waiting for a major sign in the series (such as blatant references to something that happened only in the comics) I'm not 100% sure they're canon. Even if they are meant to be canon I question if it will ever be actually acknowledged since the comics (from what little I've seen - still not gotten around to reading them) are actually along the likes of PG in places, and hasbro doesn't really want to direct it's target audience to them (i.e. the comics are meant unofficially for the bronies)

Outside of this meaning I have to keep up with a second source of media and possibly go to difficult lengths to obtain it though, I have no problem with either explanation (Though it seems the series implies A. K. Yearling aka Daring Do is the author _and_ star, both of the theories are open to interpretation depending on how far you want to stretch willing suspension of disbelief. I personally see no problem with either though as far as the *SITE* canon though ^___^ 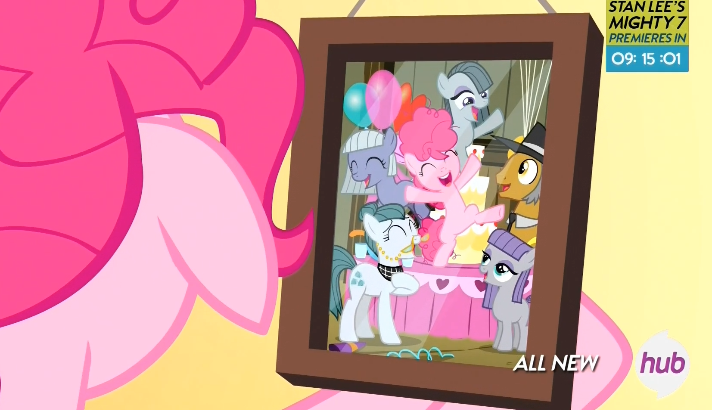 Well there is one in show confimation to the comics.

It could be a cousin, or an anything really.

It could be a cousin, or an anything really.

Actually from what I have found researching a bit that pony is a third sister introduced in the comics. I will try to find images.

Actually from what I have found researching a bit that pony is a third sister introduced in the comics. I will try to find images.

Oh okay. You may release your ponies now.

Pinkie Pie and her family are featured in the chapter book My Little Pony: Pinkie Pie and the Rockin' Ponypalooza Party!, which names her mother Cloudy Quartz, her father Igneous Rock, and two of her sisters Marble Pie and Limestone Pie.[15] In the book, Granny Pie and Nana Pinkie are each mentioned again, and a third, older sister of Pinkie Pie's is also mentioned. The story description on the chapter book's back cover reads, "When the family rock farm is in trouble, Pinkie Pie tries to help in the best way she knows how—by planning a Ponyville 'rock' concert: Ponypalooza! The party will be super-duper cool and is sure to save the farm. But...Pinkie's family doesn't like the idea and wants her to be serious for once in her life. What's a pony to do?" Of the IDW comics' My Little Pony Micro-Series Issue #5, Pinkie, Marble, and Limestone appear together as fillies in a picture on cover RI, and Pinkie and Marble appear together with Trixie both on a Jetpack Comics exclusive cover RE and on a Larry's Comics and Jetpack Comics exclusive cover RE.

Let's all just take a moment, cry our eyes out, and say that that third sister is Berryblue Pie.

Back to Royal Proclamations!

Also tagged with one or more of these keywords: Rules