New here, so just making myself known. Not sure what to put here.

Name:
Night Shadow
Sex:
Male
Age:
Aged Adult
Species:
Demon/Pony Hybrid, appears as earth pony
Eye Color:
Blood red, pupils slitted like a snake's
Skin Color(s):
Pitch black
Mane/Tail Color(s) & Style:
Storm grey with red streak through them. Mane similar in style to Rainbow Dash while tail more like a wolf.
Physique:
Tall and muscular, close to Princess Luna's height.
Cutie Mark:
White angel winged sword and black devil winged sword crossing over a grey shield.
Residence:
Canterlot
Occupation:
Captain of the Lunar Guard
Personality:
Night is a normally cold individual, but to his wife Luna and his son Crescent Odachi, he is the kindest stallion to live. He shows respect for life, but knows when lives must be taken. In battle, he becomes emotionless and hard, allowing him to take lives easier, but mourns and pays his respects afterwards. He will do what he can to avoid war, whether that means making deals, or ending threats before they can rise.
His cutie mark was gained when he was in the guard at a young age and protected a family from a murder attempt. The white sword shows he is willing to offer mercy in battle, while the black sword shows he will take a life if needed, and the grey shield shows he is balanced between the two while protecting others.
History:
Night was born like most ponies, however, the night of his birth, when he was separated from his mother and stepfather, his birth father, a stallion who had lost his mind to dark magic, used a ritual to try and turn his son into a weapon for him to use. The ritual was interrupted, due to late night workers but it did work in a sense. It failed to make Night, who was only a newborn foal at the time, into a mindless servant, but the dark magics did fuse a demonic entity with him, changing his very biology. As he grew older, this became more evident. His pupils slowly turned to slits, his teeth, when they grew in, were fangs like a wolf, and he was much stronger than other foals his age.
He was often bullied because of this, raised in Manehattan and despite that, he was considered a loving and shy foal, so he never fought back. When he turned six, his father returned for him, killing his parents, before Night's demon blood kicked in and the will to fight snapped in him, leading him to take his first life, his own father's. After running away, he lived on the streets, eating rats since he could no longer eat normal pony food.
By the time he was seventeen, he had become a thief who moved to Canterlot and stole for food, as money had no value to him when he could just steal some if needed. He never took a life unless he had no choice, but he wasn't afraid to fight back. He was captured one day during a theft and was brought before Celestia. Turns out what he was stealing was a sword that belonged to banished Princess Luna and Celestia had it under very strict lock and key.
So It was with surprise to find that it was Night, who wasn't even twenty, who not only snuck in, but took the sword before leaving. The only reason he was caught was the sword had a spell put on it to let out a shrill alarm if anypony other than Celestia or Luna herself touched it.
So, rather than being angry, Celestia was impressed with Night's skills and decided to induct him into the Lunar Guard.
At first he felt out of place, but over time he grew more comfortable and rose through the ranks until he was named Lunar Commander, a few steps lower than a Captain. With a new life and a new way to live, Night never went back to stealing, UNLESS it was to get something important, such as information on a crime he was working on.
As he made his life, he began looking up the family he once had, mainly through his mother. He soon discovered that through her, he was a descendant of the Ruler of Trottslvania, and the greatest sword master to life, Shadow Blood, before he was turned into a vampony. He also discovered that his ancestor created and mastered a sword style that fitted Night well, the Dark Sword Style. While the name could have used some work, it was the translated version from its neighpanese name, Dākusōdo, so he never changed it.
He learned and mastered the art himself, soon becoming one of the greatest swordsmen alive.
After Luna returned, Night was rather shy around her, both because of her beauty and the fact that she wore the sword he tried to steal. It took time, but the two soon grew close and before long, fell in love.
Image: 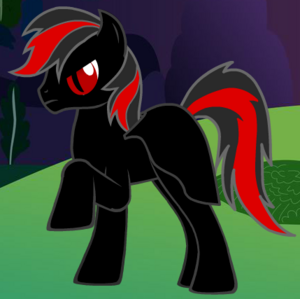 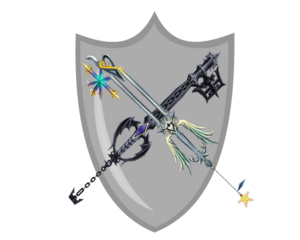 Powers/Abilities:
Magic Nullification: Because of his unique biology, magic holds less effect on him than it would on others. If a unicorn used the same magic to lift a normal stallion, Night would budge, but with enough effort, this can be worked around. However, due to the fact that using magic against Night would drain the user faster than they could put Night down, only those with insane magical reserves or alicorns themselves could do this. Otherwise, brute force is the way to go.
Master Swordsman: Night has studied and mastered the Dark Sword Style, and its many techniques. The style uses the speed and many stances of eastern styles, while combining them with the crushing and strength reliant western styles. One would say this is mixing a Knight with a Samurai. Of the several techniques, which surprisingly involve the moon being in their names, the greatest of which is the Black Wing, a technique that attacks eight points all at once, while the target can only see the user having taken a more sinister look while the strikes take the form of two great black wings.
Unnatural Physiology: As a hybrid, Night is stronger, faster, and all around harder to take down then most. He also had demonic levels of stamina and can keep fighting for unbelieveable amounts of time before having to rest. He is not unstoppable, but it would take a small army, or several strong and well armed and armored warriors to defeat him.
Healing Factor: Night has fast healing that allows him to get back in the fight faster and is the secret to his stamina. Where it would take a normal pony a week to heal from a fracture, Night heals in two days or less. He can not heal from decapitation, or a ripped out heart, but a pierced head or heart can be healed if the damage isn't too severe. Example, an arrow through the head or heart can be healed, as the healing factor heals it up as it goes through but a multi sided arrow with barbs would more than likely end him as it tears and does damage the more it goes. Poisons also can work on him, but they have to be extremely potent in order to work, otherwise, his healing factor would just get sluggish dealing with it before becoming immune to it. This also means he ages slower than others, but he seems to only have reached his prime, so it would be hard to judge how long he would live.
Pain Ignorance: Attributing to much of his toughness, Night can ignore pain completely if needed to be able to fight longer. This also has a surprising effect of allowing Night use his body at 100%, instead of the restricted ability due to the body's instinct of self preservation.
Demon Form: Night's demon half comes out, giving him a large boost to his strength, speed, and reflexes, as well as the mental capacity to keep up. His healing is strengthened to heal even what could have killed him out of his demon form. However, he can only stay in this form for a short time, five minutes, ten at the most. His appearance changes drastically. His snout extends into a short crocodile like maw with large fangs, his mane turns completely black and grows longer, covering his eyes, which glow through the black mane like lights in pure darkness. His tail also grows and turns black, but blade like quills grow out as well. His hooves change into claw like digits. His size also increases to reach nearly Celestia's height.
Weapons/Equipment/Paraphernalia:
While Night will switch armor as needed, as long as they are enchanted strongly, he usually uses only one blade. Shunsui, a black blade with a red reverse wave line. It was crafted by fusing magical nullifying metals and stones, with black dragon scales, which were sharp enough to cut nearly anything and hard enough to stop almost anything. The sheath was made of the same scales. It was also given a dip in a pool of enchanted water, which sucked the magic of whatever was in it, giving the blade the same abilities. This allows Night to not only block magic attack, but also absorb them with the sword before sending it back in a counterattack.
Weaknesses:
Null Magic: As his biology gives him great strengths, it's also that same biology that hinders him. He can not use magic of any kind, even through runes. He would need the help of a unicorn and using enchantments meant specifically for him and him alone.
Reckless in battle: While in battle, Night can shut his emotions away like flicking a switch. This allows him to kill without hesitating, but it's a double edged sword. He would have no fear or sense of preservation, so he would end up taking hits that could hinder him later, even if he could have dodged the attacks just as easily. The same can be said for his Pain Ignorance, as with him not feeling any pain, Night wouldn't realize just WHAT was wrong with his body until the battle is over and everything would come back with a vengeance.
Fatigue: While Night can fight for long periods of time, the longest being for three days straight with no rest, the moment he does stop, his body will be under extreme stress and need plenty of rest. The longest he has been under was for 24 hours, even with his healing factor helping.