Welcome. Maybe we could RP sometime?

He sounds like a fun opponent for Burning Valor to face.

I think she's an interesting character here with a very creative design (kinda like a sexy genderswap Sombra); I'd say she'd gel with my own villain character (though he's aligned Neutral Evil, and I can see your character here more Lawful Evil) and I think that the heroes of an RP would really be on their toes with just one of us.

Actually Scarlet Kunoichi would be my femme fatale.

Roleplay Area: FFA
Name: Moondust Glitter
Sex: Female
Age: Mare
Species: Dark Unicorn
Eye Color: Gray
Skin Color(s): Gray
Mane/Tail Color(s) & Style: Black and Gray
Physique: Welltoned and Fit
Cutie Mark: A Cresent Moon
Residence: The Everfree Forest
Occupation: Dark Mage
Personality: As a frequent practitioner of the dark arts one would expect her to have a very dark and/or cruel and twisted mind or be a very serious no-nonsense pony or be very mean. But this actually could not be further from the truth. Despite being a heavy user and researcher of dark magic Moondust has a very kind and caring heart and is very loving and thoughtful of other ponies. She is also very intellectual and loves to read. And she has very deep admiration and respect for those who pursue knowledge and magic and follow their dreams.
History: Moondust Glitter is the last of the race known as the Dark Unicorns. All of the Dark Unicorns were slaughtered in a great purge in order to prevent another ruler like King Sombra from ever rising again. From then on she lived a life of solitude in the Everfree Forest in a well-built but carefully concealed house with her pet Raven, Aviarius to escape her tormentors and pursuers. Moondust devoted her life to the pursuit of knowledge and studies and helping others. She took care of homeless ponies and orphans whenever she found them. Always ensuring that they found a good home. 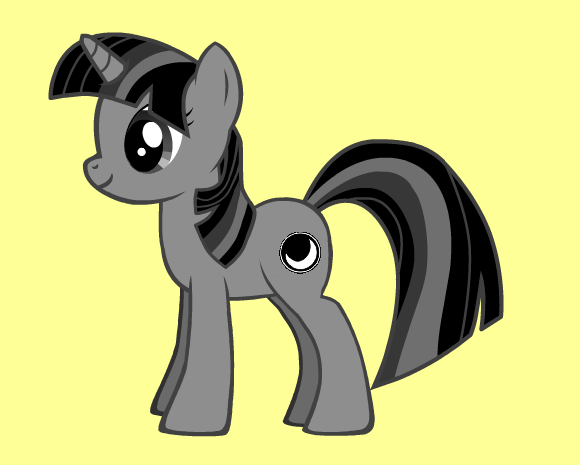 Dark Magic Expert: Moondust is a mistress of The Dark Arts. She can cast Hexes and Curses and more. She is also capable of very strong attack and defense magic involving Dark Magic.

Necromancy: Moondust is a highly skilled Necromancer. She can call forth the souls of the dead from the afterlife and place them in an uninhabited vessel of her choice. Even dolls, reconstituted corpses made from their ashes, or clay dummy replicas of their corpses.

Psychic Prowess: Moondust is also very adept at Telekinesis, Psychokinesis and Telepathy. She can suspend even heavy objects and speak to ponies telepathically.

Astral Perception: Moondust possesses the ability to see and hear spirits and is also able to contact and communicate with the dead at will by closing her eyes and entering deep concentration.

Superior Intellect: Moondust possesses genius level intelligence. Her brain is one of her very greatest assets. She possesses an IQ far above 200 and even most scholars and college professors are baffled by her brilliant mind.

Books: Moondust has a whole library worth of books in her home.

Light Magic: Because she is a dark magic user Moondust is at a disadvantage against Light Magic users in battle.